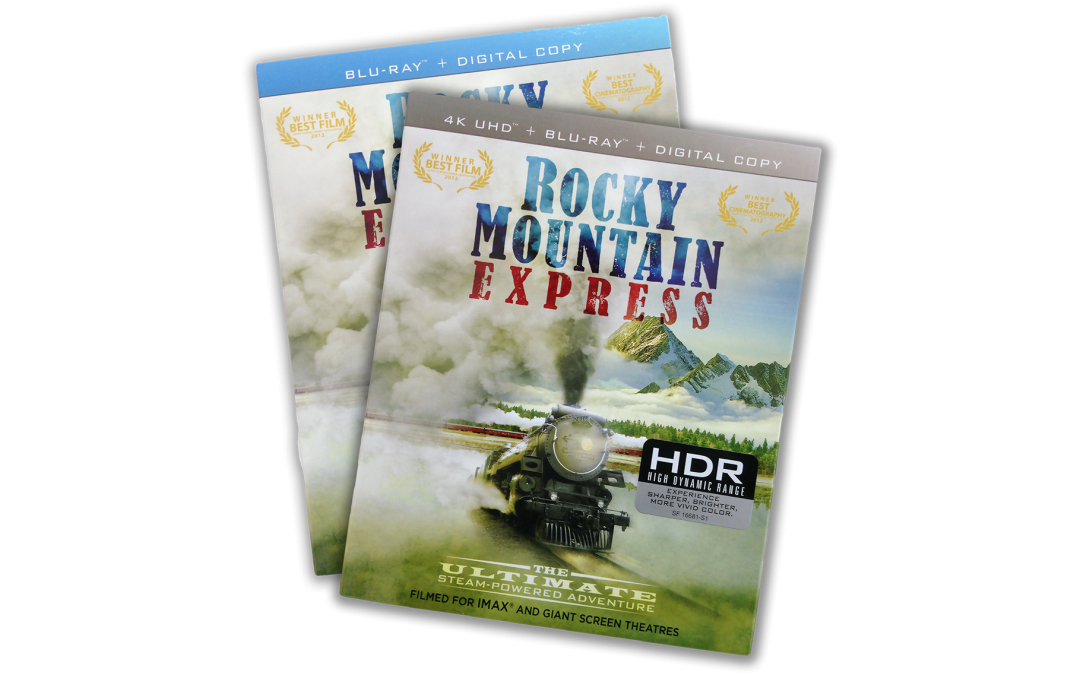 As of July 12, 2016, Rocky Mountain Express is available in Blu-ray and 4K Ultra HD Blu-ray editions from local and online retailers. Check out the reviews and where to buy below.

“It’s terrific.” “It’s one of my favorite IMAX films to date.”—Bill Hunt, The Digital Bits
The review at: www.thedigitalbits.com

“This is one of the most gorgeous renderings of early man-made achievements and nature. This is an unforgettable visual experience and an absolute reference-quality presentation that every home theatre enthusiast should own.” 5/5 —Gary Reber. widescreenreview.com
The review at: www.widescreenreview.com

“Wow.” “This 4K UHD / Blu-ray presentation crushes it in terms of visuals and audio presentation. You’ll want to see and just take this whole thing in.”—Brandon Peters, whysoblu.com
The review at: whysoblu.com

“Filled with marvelous images of steam locomotives riding a treacherous track in the Canadian Rockies, this IMAX presentation ranks among the large format elite. Rocky Mountain Express is a vista-drenched tourist ride much as it is historical saga.” 4.3 stars.—Matt Paprocki, DoBlu
The review at: doblu.com

“Breathtaking.” “Rocky Mountain Express is wonderful trip down memory lane with some of the most incredible landscape photography you’ll ever see.”—Bill Kelley III, High-def Watch producer
The review at: hamptonroads.com

“It has only been four days since I watched Rocky Mountain Express, and I am already itching to revisit this lovely documentary.” “Shot in 15 perforation/70 mm film, its aerial footage captured from helicopters and gyro-stabilized camera mounts, Rocky Mountain Express works as both a compelling educational document and a dazzling picturesque journey across the Great White North’s countryside. Far from a dry history lesson, the film brings a visual lyricism to its images, complemented by an eclectic music score—blues, spare piano melodies—and stirring soundtrack cues.”—Dustin Putman, theblufile.com
The review at: www.theblufile.com

“A beautiful and interesting documentary on the building of a railroad, this IMAX feature looks great in 4K UHD”—John Sinnott, DVD Talk
The review at: www.dvdtalk.com

4 stars.
The review at: www.avsforum.com

“…deserves a rating of five stars.”
Teacher and Traveller

Check online for stock and pricing. Some sources include: 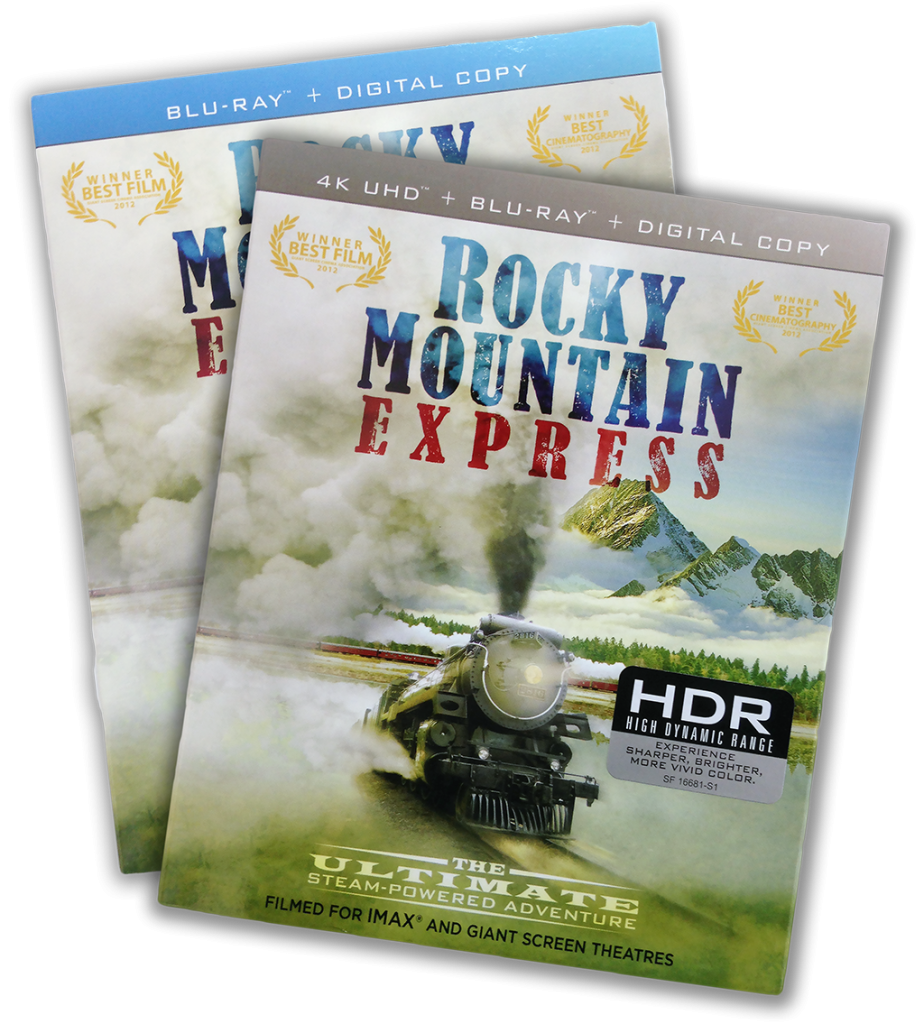 Shout Factory, a multi-platform media company, has just unveiled its first slate of new family-friendly movie releases in the 4K Ultra HD™ format with high dynamic range (HDR), that will deliver visually stunning picture clarity and immersive audio for the optimal home entertainment experience. The discs are expected to be released beginning in late spring/early summer 2016 with pricing to be announced.

The IMAX® Experience Rocky Mountain Express is filmed in full 15/70 negative—world’s largest film format-guaranteeing spectacular image fidelity in the 4K Ultra HD medium. Together with its authentic story and award-winning cinematography, the film promises to be a highlight of the new medium.

“As the Ultra HD devices and entertainment content begin to populate the consumer marketplace this year, we are announcing our commitment to the UHD format joining industry leaders and major consumer electronics companies,” stated Melissa Boag, Shout’s Senior Vice President of Kids & Family Entertainment. “We look forward to presenting these awe-inspiring movies to a broad audience in the UHD format around the same timeframe that the traditional Blu-ray™ edition hits national retail.” Shout Factory plans a strategic staggered launch of these movies in 4K Ultra HD with HDR through physical home entertainment releases and select digital entertainment distribution platforms in North America, beginning in late spring/early summer 2016. A specific date for the release of Rocky Mountain Express will be announced.

Colin Low passed away in hospital after a brief illness on February 24, 2016. Cowboy, artist, storyteller and pioneering Canadian filmmaker; director, animator, producer, mentor and collaborator at the National Film Board of Canada… and so much more, Colin is survived by his wife Eugénie St. Germain and sons Ben, Stephen (Shaune) and Alexander (Kate) and grandchildren Meghan, Léandre, Shannon and Laura.

A memorial service in remembrance and celebration of Colin’s life will be held Saturday, March 12, 2016 at 2:00pm at the Unitarian Church of Montreal, 5035 Boulevard de Maisonneuve O, Montréal, QC. To be followed by a reception. As an expression of sympathy in lieu of flowers, a donation to a charity of your choice is appropriate. Funeral arrangements entrusted to Voluntas (Voluntas.ca, 514-695-7979). 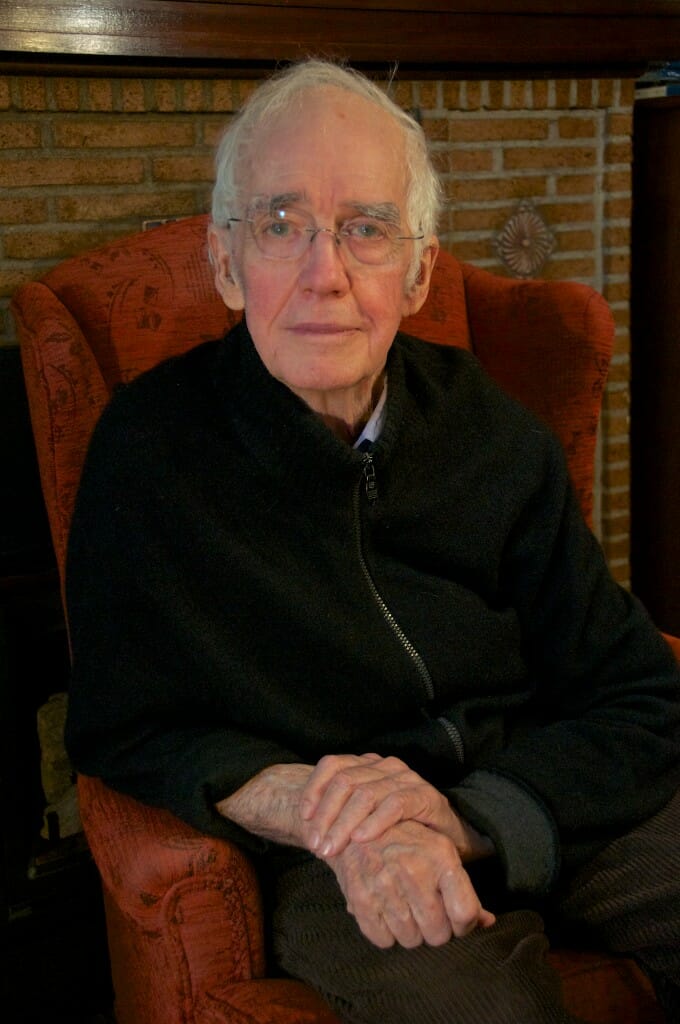 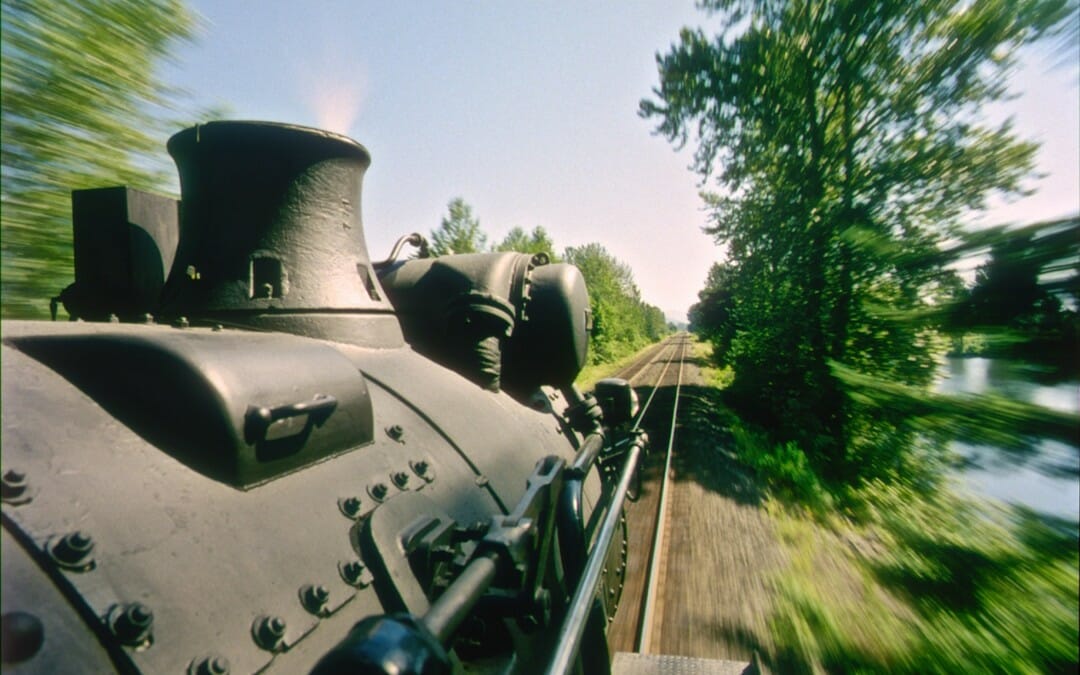 Rocky Mountain Express will run at the LG IMAX Theatre in Sydney, Australia -– February 2016 to September 1, 2016.

Check the listing for showtimes: https://www.imax.com.au/films/coming-soon.aspx 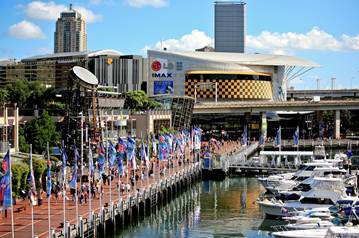 Interview with the director: http://www.bare-essentials.com.au/the-ultimate-railway-adventure/

Rocky Mountain Express at the World Golf Hall of Fame

Rocky Mountain Express will run at the World Golf Hall of Fame and IMAX Theater in St. Augustine, FL. between November 6, 2015 and November 5, 2016.
Check the local listing for showtimes: http://www.worldgolfimax.com/movies/rocky-mountain-express 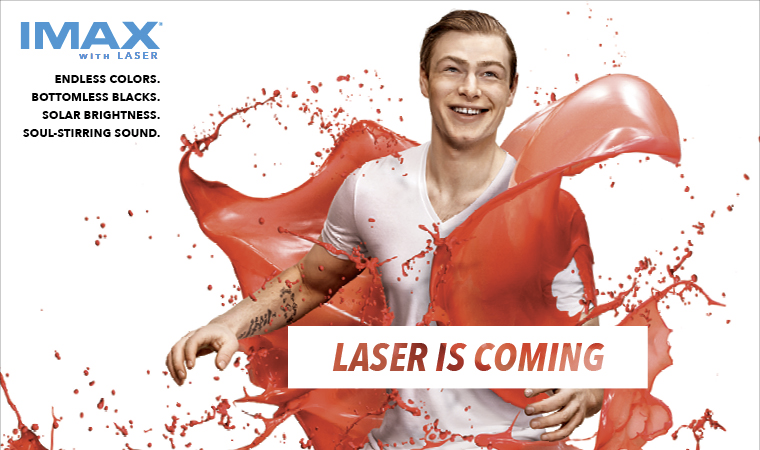 The award-winning IMAX Experience will be featured in flagship installations of the new IMAX with Laser system in museum environments, including the Pacific Science Center in Seattle WA, IMAX Victoria inside the Royal BC Museum in Victoria BC, as well as TELUS World of Science — Edmonton, in Alberta. The Pacific Science Center will feature Rocky Mountain Express beginning late November 2015 and IMAX Victoria is slated to re-launch the film in 2016. TELUS World of Science—Edmonton will exhibit the laser edition of the film beginning October 14th, 2015.

Filmed in the 15 perforation-70mm motion picture format, and first released in 2011, Rocky Mountain Express propels audiences on kinetic and emotive steam train journey through the Canadian Rockies and relates the epic story of the building of the first transcontinental railway. Featuring stunning aerial and locomotive footage, the film offers a unique showcase for the new IMAX with Laser technology. 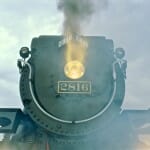 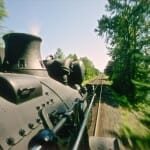 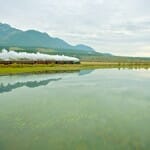 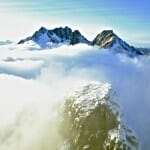 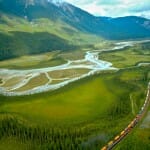 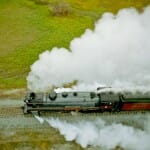 IMAX with Laser has been described as a re-imagination of the movie-going experience. Designed at the first permanent IMAX theater (Cinesphere at Ontario Place), the new 3D-capable laser-driven system is some 60% brighter in output than existing systems and features a significantly larger colour gamut, as well as the capacity to project at an aspect of 1.43:1, consistent with the tall format used by existing IMAX film capture and projection technology. IMAX with laser features two 4K projectors running simultaneously with sub-pixel alignment in both 2D and 3D to deliver a perceived resolution greater than 4K. Sharper and brighter images, darker blacks and an overall heightened level of realism are hallmarks of the new system. For 3D presentation, re-designed 3D glasses take advantage of the purity of laser light to eliminate residual light ghosting inherent in traditional 3D projection technologies. The sound system for IMAX with Laser includes 6 additional channels with a sub-bass, speakers now in the ceiling, as well as additional side wall speakers. The new system is linked to an IMAX network operations center, enabling around-the-clock monitoring of system components.

The Pacific Science Center in Seattle installed IMAX with Laser in April. IMAX Victoria in Victoria BC will offer IMAX with Laser beginning March, 2016. The Cineplex ScotiaBank Theatre in Toronto was the first theatre to debut IMAX with laser while the TCL Chinese Theatre was the first in the U.S. to debut the technology. IMAX has signed more than 71 laser deals around the world including the most prestigious and iconic commercial theatres, museums and science centers such as the Empire Leicester Square in London; AMC’s Lincoln Square in New York City, Universal CityWalk in Los Angeles, and Metreon in San Francisco; Darling Harbour in Sydney; CineStar IMAX Sony Center Berlin at Potsdamer Platz; the Smithsonian’s 3 IMAX theatres and; TELUS World of Science–Edmonton, where Western Canada’s first IMAX Laser will debut in October.

Where to See Rocky Mountain Express 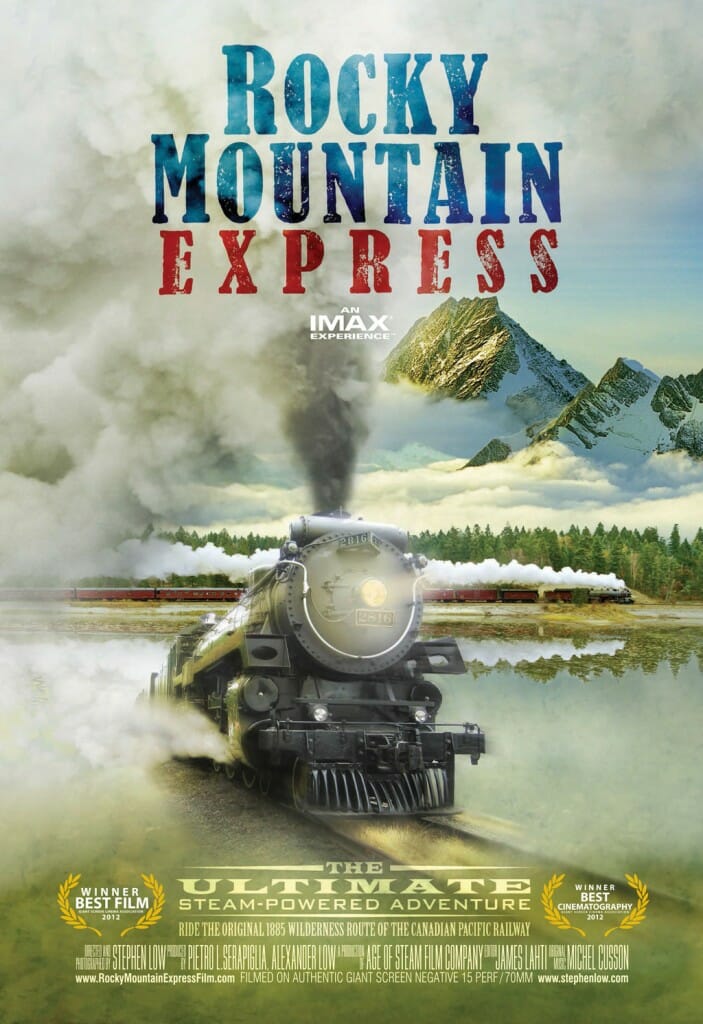 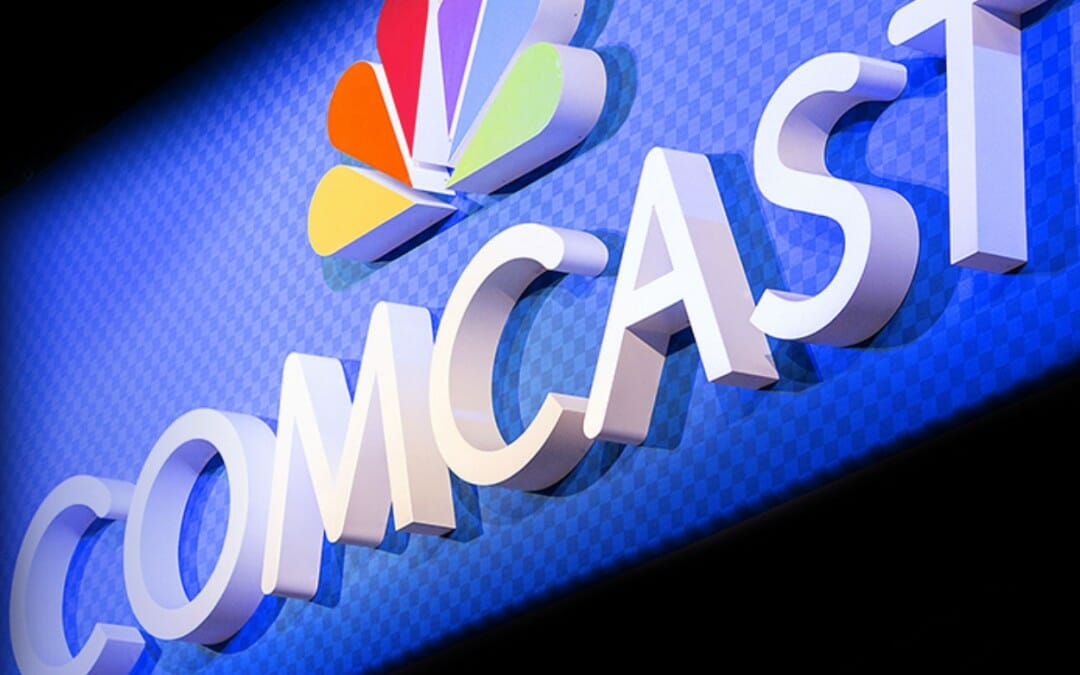 Select titles from The Stephen Low Company will be available for ultra high definition (4K) home viewing via Comcast and the the Xi4, an X1 Entertainment Operating System® set-top box. The selection of titles includes the award-winning films Rocky Mountain Express, The Ultimate Wave Tahiti and Fighter Pilot, among other IMAX and giant screen titles licensed through K2 Communications and Havoc TV. The titles will be available to Comcast Xfinity TV subscribers in the U.S. equipped with UHD TVs and the new X1 set-top box, the Xi4.

Captured for premium presentation on giant IMAX® screens, productions from The Stephen Low Company represent the highest standards of media quality and are regularly used to showcase the capabilities of advanced ultra-high definition, 3D and surround-sound technologies, including  television, projection and home theatre systems.

An Interview with the Director

Filmmaker Stephen Low was interviewed by the pop culture site www.popculture-y.com for the opening of Rocky Mountain Express at the IMAX Melbourne Museum (Melbourne, Australia). “The scenery and the photography in this film is jaw-dropping!” notes interviewer Katherine Back of Pop Culture-Y. “Was trying to capture the Canadian landscape a part of what prompted you to make the documentary?”  Check out the interview here: http://popculture-y.com/2015/04/interview-stephen-low-director-rocky-mountain-express/

Other locations:
Where to see it (exhibitor locations and dates) 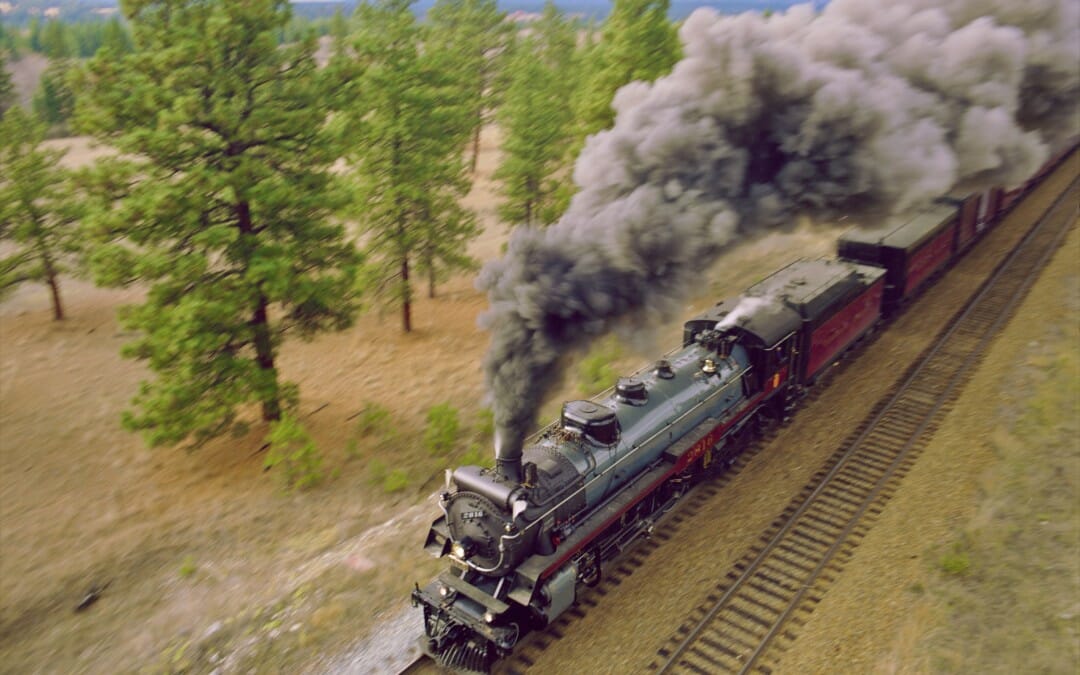 By Special Arrangement. We’re pleased to announce that Rocky Mountain Express will be presented in celebration of Canada Day 2015 and the MacDonald Bicentenary at the historic Regent Theatre in Picton, Ontario—July 1, 2015. Come celebrate!

For details and showtimes, visit The Regent Theatre.

The historic Regent Theatre is located on Main Street in Picton, Ontario (Prince Edward County). Designed in the style of an Edwardian opera house, The Regent Theatre first opened its doors in 1922. Since 1994, the theater has been operated by The Regent Theatre Foundation, a community based, not-for-profit organization. For more information, see: about The Regent. 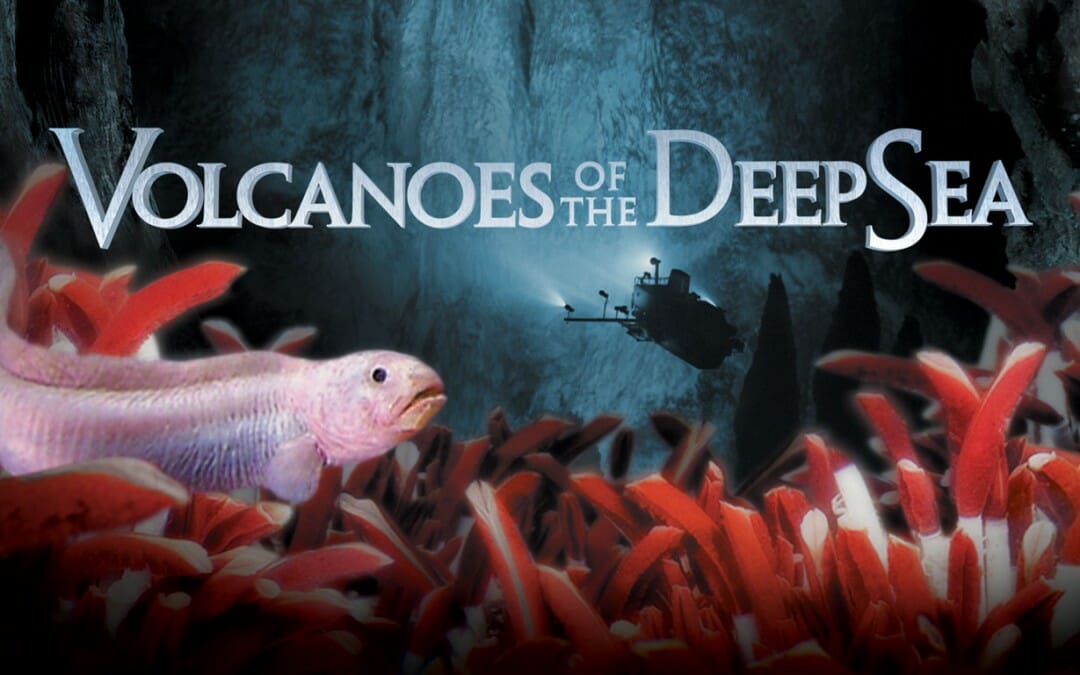 The Stephen Low film Volcanoes of the Deep Sea will be exhibited at the Keong Emas IMAX Theatre in Jakarta, Indonesia from June 15th, 2015 through June 14th, 2016. Premiered in 2003, the groundbreaking giant screen film presented the first extensively lit and filmed scenes of life thriving on hydrothermal vents in the deep Atlantic and Pacific oceans.

Opened in 1984, the Keong Emas (“Golden Snail”) IMAX theatre in Jakarta is among the largest IMAX theatres in the world with a screen dimension of 21,5 metres high x 29,3m metres wide. The iconic theater, shaped like a shell, draws its architectural design inspiration from an historic Javanese story about a beautiful princess (Dewi Sekartaji) who is magically transformed and kept in a golden snail shell.